What is Environmental Impact Assessments?

Environmental Impact Assessments (EIAs) are detailed studies used to evaluate the environmental impact of a proposed project or development taking into consideration the inter-related socio-economic, cultural and human health impacts (Glasson et al. 1999; Modak and Biswas 1999). Data and information are collected and analyzed, tobe taken into consideration by decision-makers, planning authorities, and stakeholders. An EIA study thus aims to:

Why does it have to be done?

As in other countries, there are Palestinian laws relating to environmental issues that impact on biodiversity and there are requirements for conducting EIAs for certain projects. The Palestinian Environmental Law (PEL) was approved by the PLC on 6 June 1999 and signed by the Palestinian president 28 December 1999. It states that the Palestinian National Authority (PNA) has the right and responsibility to study and assess any project; to approve or decline the project; tomonitor it for environmental impact and to manage and protect natural resources. It should protect the environment and public health and welfare. It should protect and take action toconserve endemic or endangered species. It has the right to conserve ecologically sensitive areas. Other relevant laws are the Palestinian Local Government Law No. 1 of 1997, the Industrial Estates and Free Industrial Zones Law No. 10 of 1998, Natural Resources Law No. 1 of 1999, the Palestinian Water Law No. 3 of 2002, and the Protection of Animal Wealth Law No. 8 of 1998. The authority to issue the laws were derived from signing Oslo I (1993) and Oslo II (1995) agreements between the PLO and Israel which were supposed to be interim arrangements pending conclusions of negotiations on final status issues which include statehood, borders, security, refugees, and Jerusalem. As part of these agreements, the two parties agreed to protect the environment in compliance with international standards, conduct EIAs protect soil, and other natural resources etc (see UNEP, 2003).

What qualifies PMNH/PIBS to have an EIA Unit?

The Palestine Institute of Biodiversity Research (PIBS) and the Palestine Museum of Natural History (PMNH) at Bethlehem University work to research, educate about, and conserve our natural world, culture and heritage and use knowledge to promote responsible human interactions with our environment. In the past two years, we managed to accomplish many things as noted on the website (palestinenature.org). Part of our accomplishments related directly to doing EIAs such as: 1) we published several research papers on topics ranging from environmental health to biodiversity to museology, to reptiles, to butterflies, and more, 2) performed several surveys relating to key areas in Palestine for example an IUCN/EQA sponsored survey of Wadi Al-Quff (the first Palestinian administered natural reserve creating a management plan based on scientific data), 3) developed a comparative collection and the key human resources needed for classification of plants and animals, 4) built partnerships with local and global governmental and non-governmental agencies resulting in benefit to both the environment and to sustainability, 5) developed databases and other resources including a photo library, a digital library, a local biodiversity database, and a wild plant seed bank. We now have an integrated system and a solid team (see below) for research, education, and conservation to address areas of need in Palestine. The museum grounds and its botanic garden (integrated ecosystem) is also an oasis for wildlife in Bethlehem and an oasis for young people seeking alternatives and a new way of looking at themselves and their environment enabling both empowerment and nature conservation.

How do we do our studies?

The main components of an EIA involve the following stages:

The main areas of information gathered in our studies include:

Who is involved in EIAs at PMNH/PIBS?

Expertise in mammalogy, ecosystem structures, biodiversity, molecular genetics (including genetic biodiversity). Professor at Bethlehem and Birzeit University who has undertaken a number of studies on key biodiversity areas such as Jabal Al-Akhdar in Libya to Wadi Quff in Palestine. Prof. Qumsiyeh is the executive director of PMNH/PIBS.

Professor at Jordan University of Science and Technology and co-scientific director at PMNH/PIBS who published over 140 scientific papers and has undertaken studies, including EIAs, throughout the Arab World. Expertise in topics ranging from reptiles to molluscs to environmental threat analysis.

Expertise in ornithology and nature conservation and extensive work on birds in Jordan and Palestine including threats posed by new developments, such as windmills). Also familiar with other groups such as bats.

Geology graduate of Germany. Published significant papers on topography and geology of the area including the geology of key areas around the rift valley.

Botanist and taxonomist working at the National Agricultural Research Center and research associate at PMNH/PIBS. He he has undertaken floral surveys in key biodiversity hotspots in Palestine and nearby countries and has identified key plant biodiversity areas in Palestine

Staff zoologist at PMNH/PIBS, he has published work on reptiles, freshwater snails and the diet of owls, among other topics..

We are collaborating with experts around the world in species identification including that ofchallenging groups such as fungi, spiders, and collembolan arthropods.

The EIA unit at the museum was made possible through support from the French Consulate and through local donations and museum funds.

For more details on conservation issues in Palestine click on this link.

You can email us at info@palestinenature.org 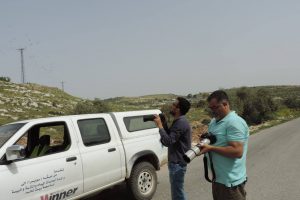 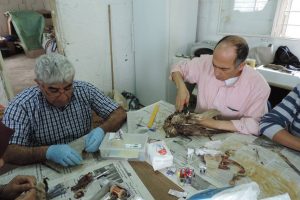