The museum has rescued many animals and released them to the wild. 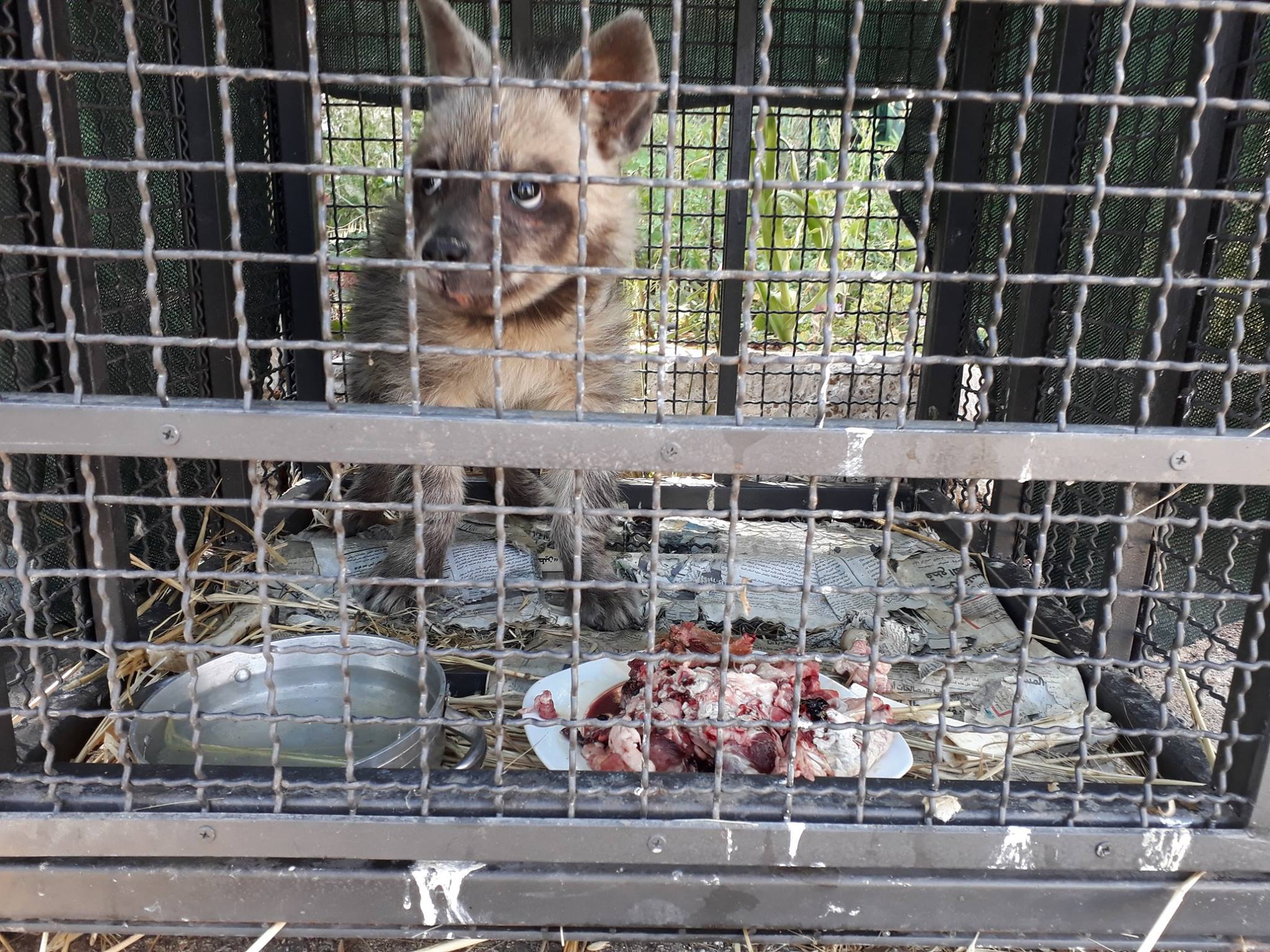 Linda on the day she was rescued.

In May 2019, PMNH was approached by the Palestinian Environmental Quality Authority with a Striped Hyena cub, named 'Linda' by the museum staff. The hyena had been seized from Hebron, where she was being sold on the internet. As Linda was only about four months old when she arrived at the museum and no longer had a family, it was unlikely she would survive if released at that stage. The staff decided to keep Linda at the museum until she was old enough to fend for herself, and quickly created an enclosure to house her. 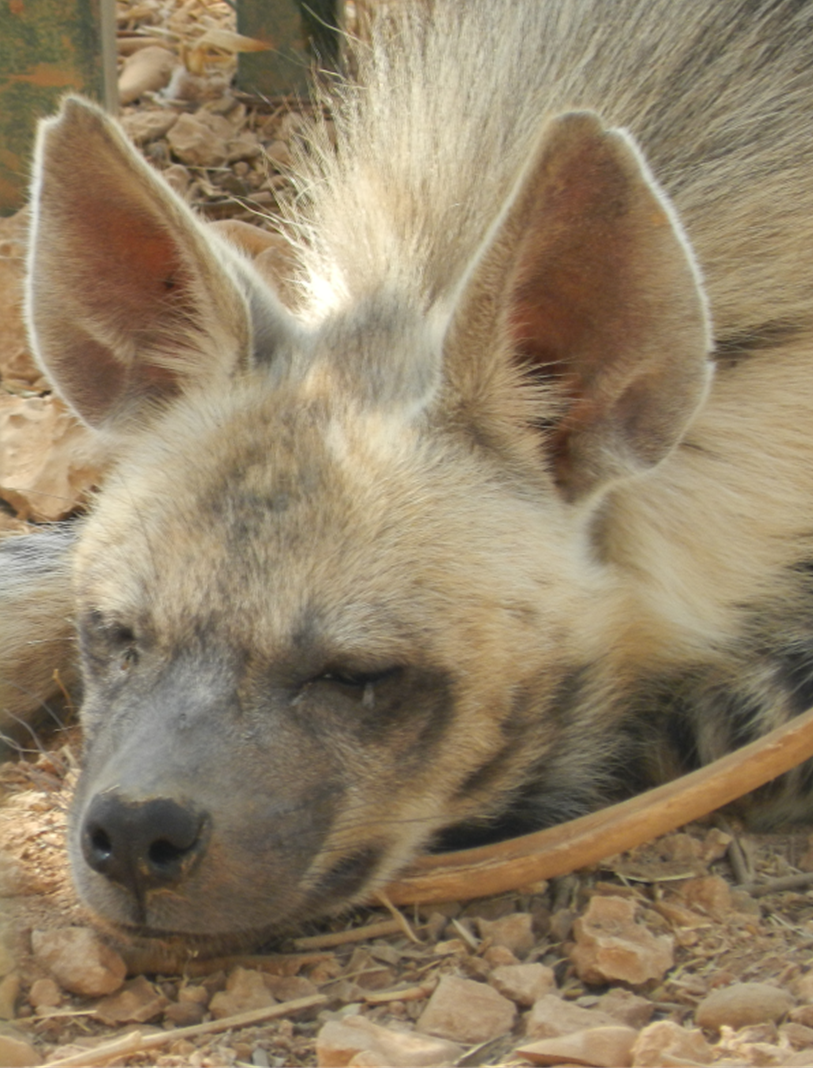 Limited land at PMNH made it difficult to equip Linda with the skills needed for survival in the wild. However, staff and volunteers helped prepare Linda for her release by hiding food in boxes around the enclosure to help Linda develop her sense of smell. Despite her young age, Linda also dug a burrow for herself under the olive tree in her enclosure.

Linda was released in February 2020, when she was just over a year old. She was coaxed into a cage before being driven to a rural area and released. Museum staff returned a week later to leave more food for Linda. Pawprints observed near the site of release suggest that Linda is doing well in her new home. 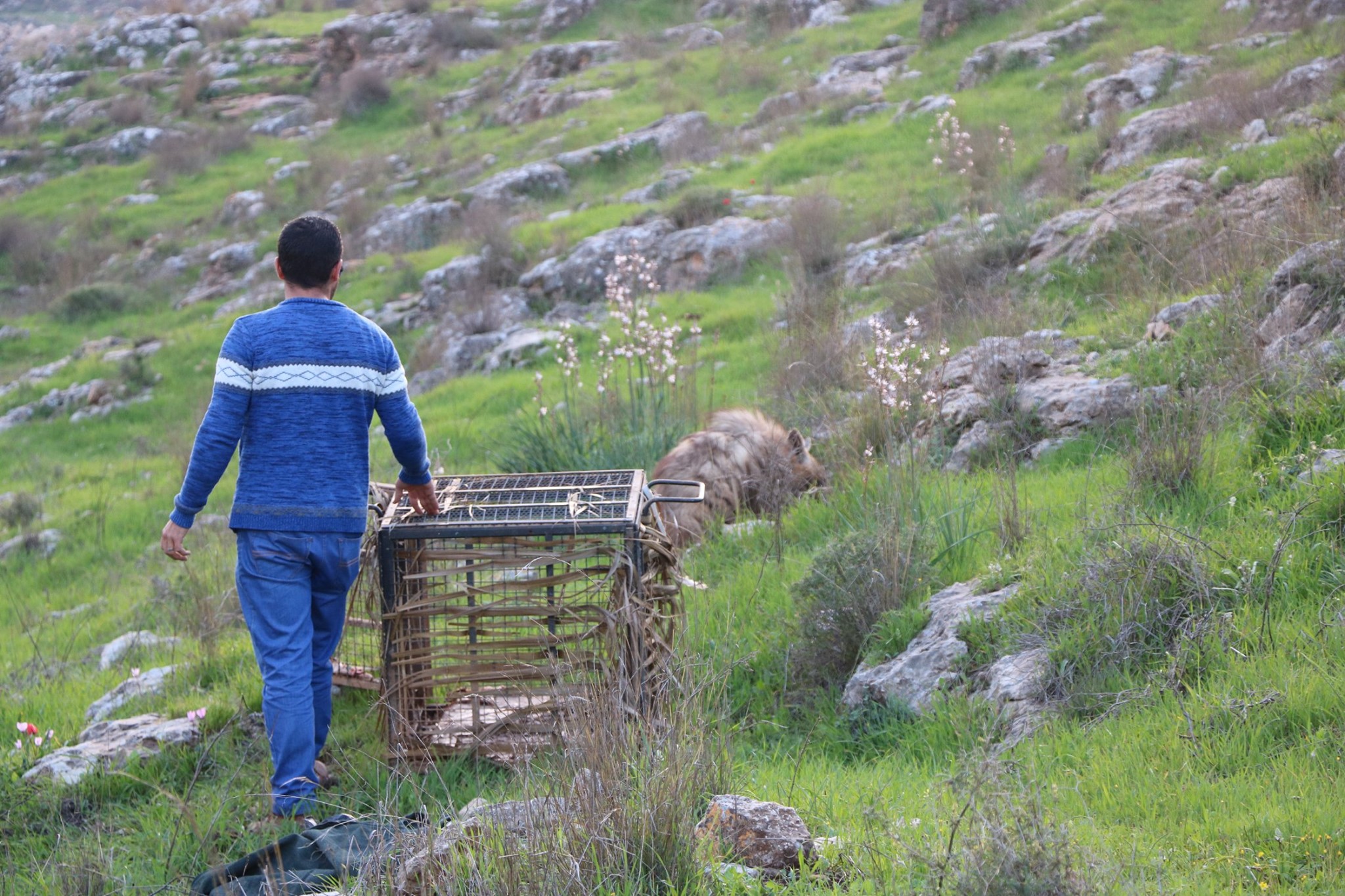 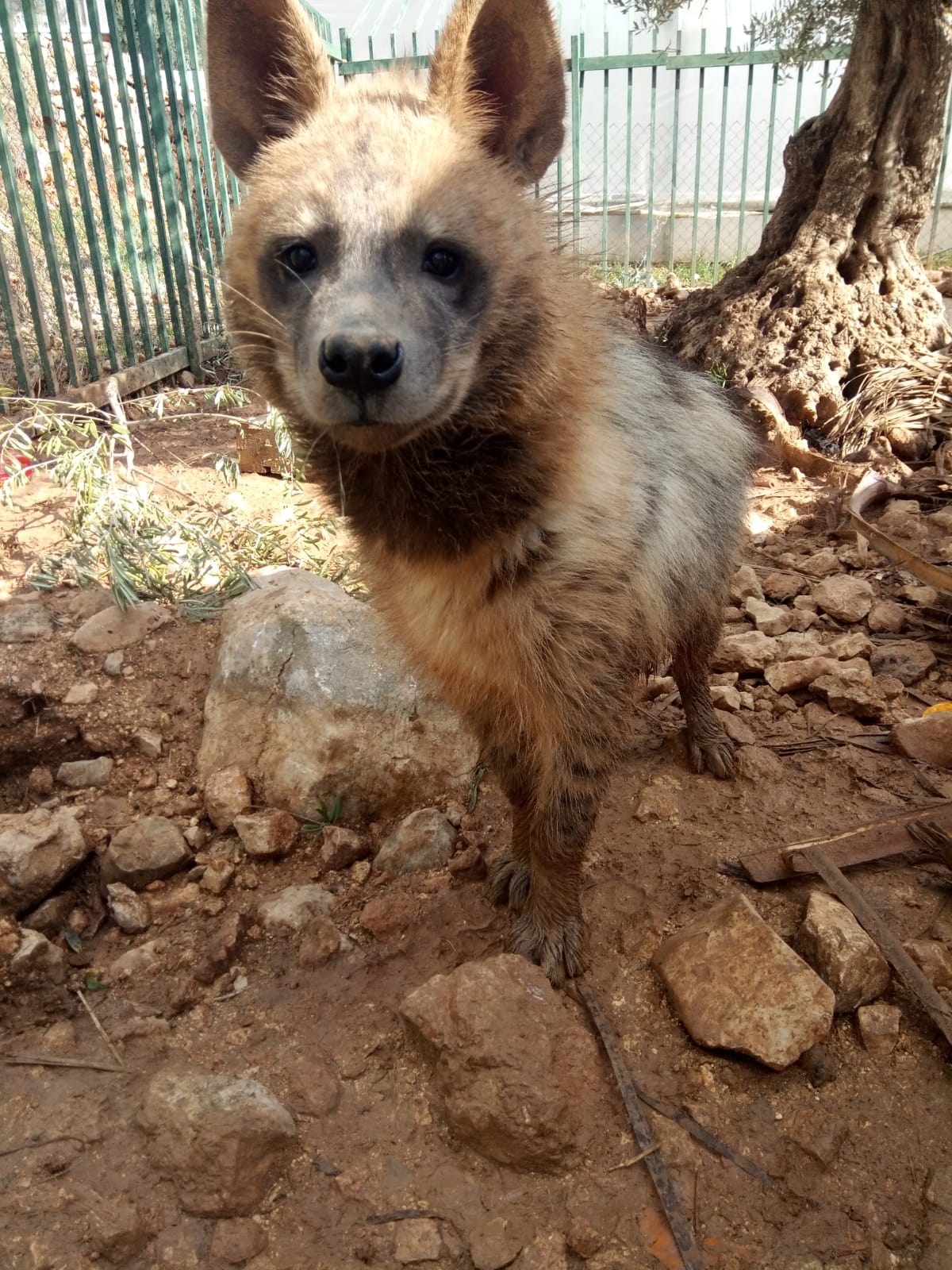 Striped Hyenas are found in a variety of habitats, including mountains, grasslands, and scrub woodlands. They usually live for about 12 years, although they can live much longer in captivity. Hyenas are mostly scavengers.

The Striped Hyena is found over a wide range, but with a declining population of only 5000 - 10,000 mature individuals, the IUCN classes the species as 'near threatened'. Reasons for this include road traffic and hunting. The separation wall is also harmful to hyenas as it restricts their movement and fragments their habitat. Myths also cause people to fear and occasionally harm hyenas, but in reality hyenas are usually very timid towards humans. Staff and volunteers at PMNH had to take extra care to stop Linda becoming domesticated as she seemed to be forming attachments to several people! 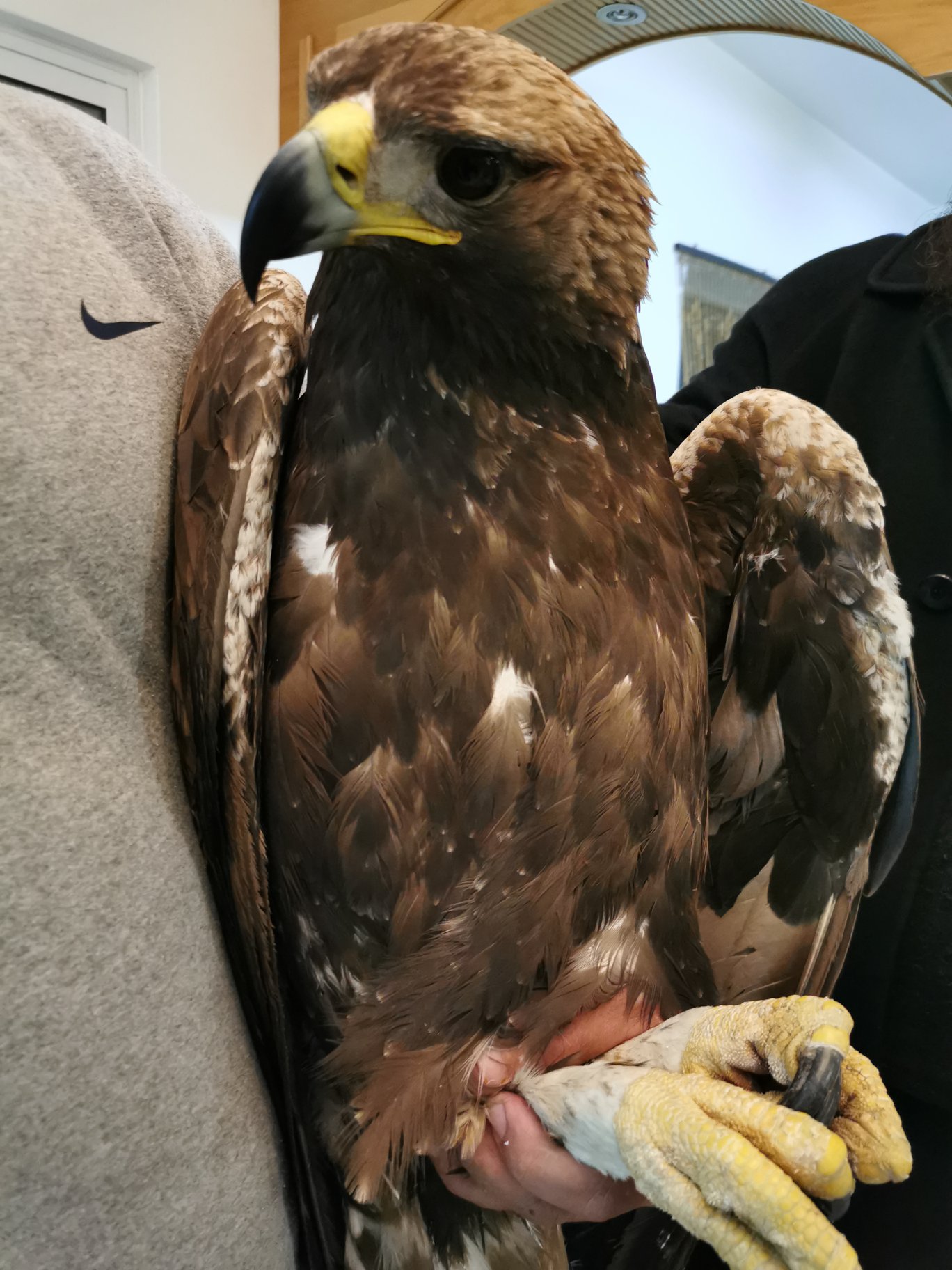 The Eagle on the night she was rescued.

Late one evening in December 2019, a sick Golden Eagle was bought to the Qumsiyeh's apartment in Beit Sahour. The eagle had eatened part of a goat's carcass that had been poisoned, with the intention of killing hyenas. The eagle was very weak, and had been found by a tour guide who bought her to the Qumsiyeh's to be cared for.

The eagle spent several days at the museum, where she was fed and cared for while she slowly regained her strength. After about a week, the eagle was strong enough to be released. Staff and volunteers from PMNH and the EQA watched as the eagle soared away over the mountains of Nablus.

An enormous bird of prey, the Golden Eagle has a wingspan of over two metres and lives for up to 30 years in the wild. The Golden Eagle has a very large range, and is found in Asia, Europe, North America, and parts of northern Africa. It is classed as 'least concern' by the IUCN, but is uncommon throughout its range. 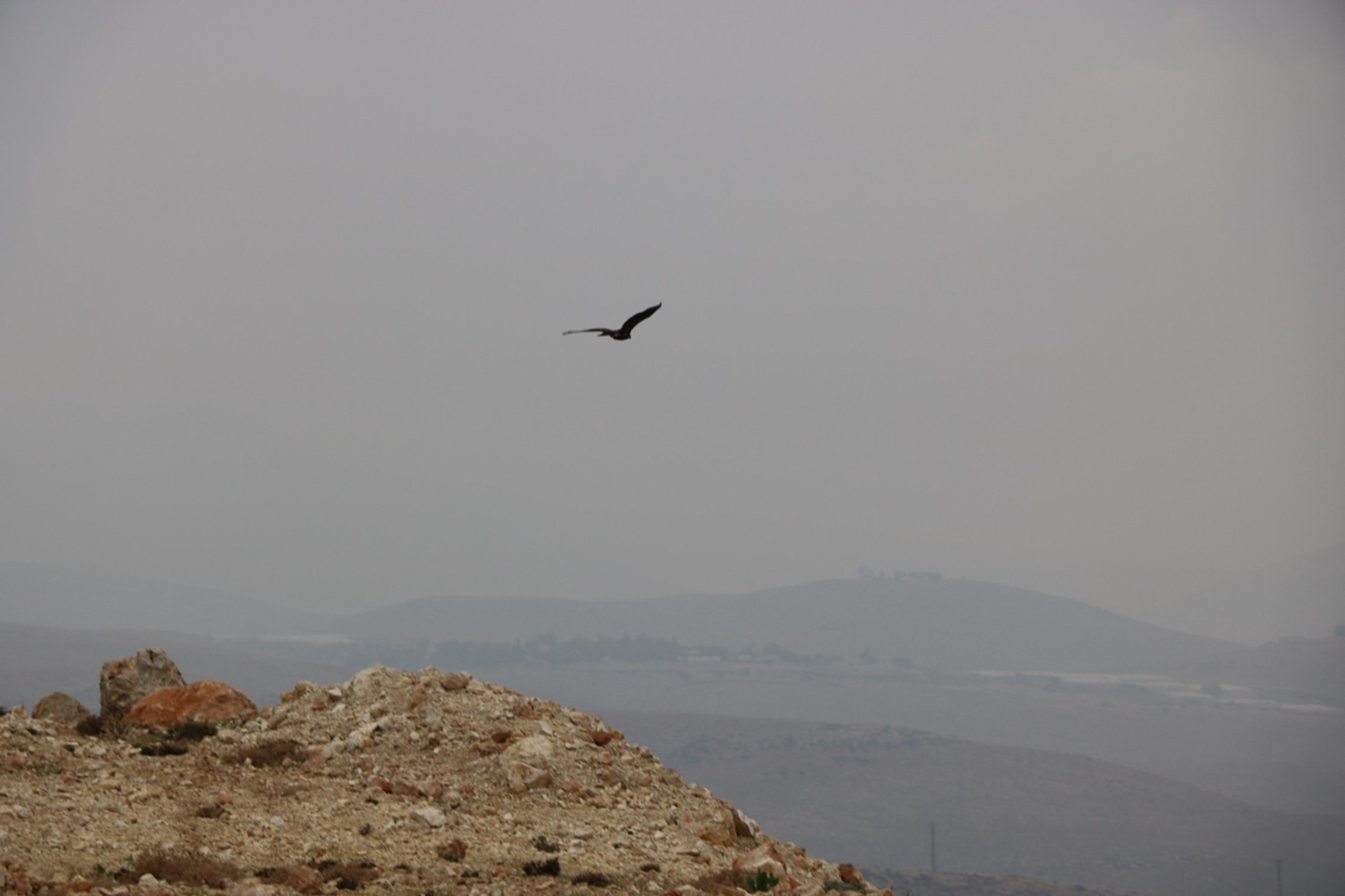 The Golden Eagle is released.